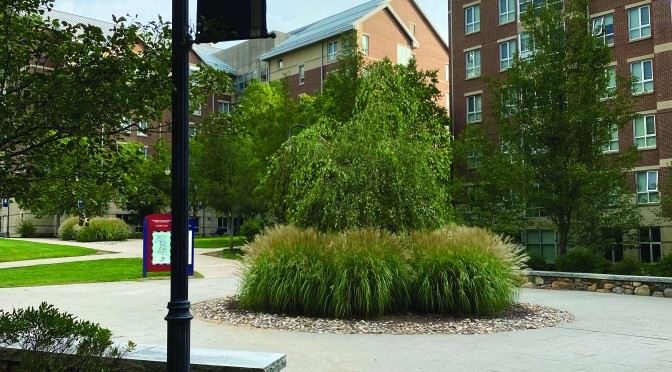 In the book Cultural Studies: A Practical Introduction, Michael Ryan argues that Cultural Geography teaches us that if the world around us shapes our lives, we also make the world around us over in ways that embody and embed our thoughts, imaginings, ideals, and meanings(12). This idea can be shown in the Eastern community, where not only the campus holds its own “culture,” but also every residential hall has one.

To start off, Eastern’s educational culture is one that is liberal. In meaning, the education is one of creative and free. Eastern is a university located in the state of Connecticut, which is a liberal state. The state constitution, ideals, beliefs, and meaning shape what Eastern’s campus is. It is come to the extent in which Eastern’s campus can be viewed a demonstration of what life will look like beyond college and school life in case a person stays in Connecticut.

Speaking of a demonstration of life in Connecticut, it is rumored that New Yorkers are one of the most violent drivers in the country. However, New Yorkers who are attending Eastern for several weeks and months become less violent in driving, since the state and the environment that Eastern do not require violent driving. In fact, Eastern’s campus is located in one of the quietest towns in Connecticut, in which most roads around it does not allow a driver to pass each other.

Another demonstration is that Eastern does not participate in big athletic championships, just like Connecticut, whose official teams are the UCONN Huskies. In that sense, we can say that Connecticut has affected and influenced how the culture at Eastern is acted upon and practiced.

The culture of Connecticut is also connected to the food it represents, along with the diversity that comes with it. For example, Connecticut has ranked the top state for its pizza. Looking around Eastern, we can see that there are a lot of places that sell pizza; moreover, some are local businesses like Pleasant Pizza and Tony’s Pizza, and some are chain restaurants, like Papa John’s and Dominoe’s. To add to the pizza, the Student Center at Eastern also offers pizza that is both as delicious and less expensive than the pizza places found outside Eastern’s campus. Not only does it bring the diversity of flavors, but also the diversity of what people think is a good pizza.

Speaking of the diversity of people, Eastern is considered one of the most diverse schools in the state and probably in New England. It has at least one student of every culture, Arab, Asian, African, European, and Latin. Not only does Eastern has a diverse group of people, but it also has a diverse study of languages in its cultural studies. Connecticut plays a massive role in this diversity. Norwich, CT, is dominated by the Arabs. Mystic and East Lyme by South Asians and Arabs. New London is dominated by mostly Europeans. Storrs is dominated by South and East Asians. New Haven and Hartford are dominated by Americans and Italians. With this rich diversity, it can be expected that public and private schools in Connecticut to have a diversity of cultures and languages.

Ryan also said that people can shape the world around them(12). To shape the world around them, Eastern created its own rules and followed its own beliefs on how to handle important matters. For example, even though Title IX is a federal law and all schools have to follow it, Eastern has gone an extra step to ensure the safety of its students, whether it is mentally, physically, or spiritually. Eastern has conducted studies, hired outside resources, and even listened to feedback from students and faculty members on improving the Title IX system and beliefs on Eastern’s campus. Not only is it mandatory for the students to be familiar with it, but the training includes faculty, students, and student-athletes.

Student-athletes also have their own culture here at Eastern. They have their own routines, schedules, and clothes that they wear to show that they belong to a particular sport. Also, sports at Eastern vary. Eastern has basketball (American), soccer (European), rugby (Australian), lacrosse (Native American), and many more. Sports at Eastern shape what the student has an interest in, and in case there is a sport not provided, a student can open a club and have the sport be played by other students and sometimes against other schools in case that school has a team for that sport.

Sports play a huge role in culture since it is also linked to the bodies of the players. Some players may not have the body requirements for a particular sport, but they can always try another sport that they might be interested in. If they want to play a sport that can not really fit in with their bodies, Eastern created Intramurals, where students can create teams for sports and play whenever they want, giving them the freedom to play the game more than working for the game.